We hope you all had a great Christmas! I picked my favorite shots of the kids from the day. Our favorite thing was watching Henry in his new football uniform, complete with football and helmet. He wore it all day; so cute! I've never really been that impressed with the outfit; I much prefer baseball uniforms, but he changed my mind! I think Henry may have enjoyed the free reign of sweets yesterday even more than the opening of presents! He certainly took advantage of the slack rules! 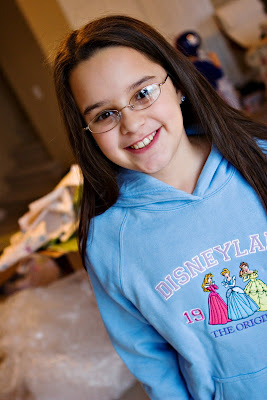 I just love this picture of Kate - huge smile. She was the first to be done opening presents. I was the same way when I was young...well really I was that way until I had my kids. :) This picture is so "Christmas" to me...complete with messy hair and PJs. 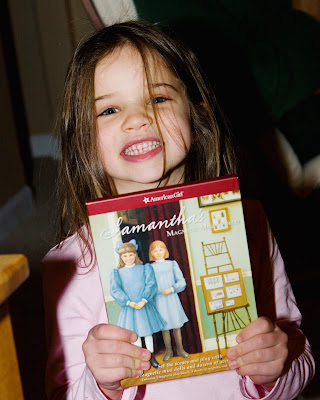 Addy still had at least six gifts under the tree when everyone else was done. She was happy to play with her gifts and didn't have that burning desire to KNOW what was in the rest of the still-wrapped boxes. We received two handheld games as gifts, Yahtzee and this Rubik's cube game. Phil, Addy, and I switched back and forth with the two all day. Even Kate and Henry played the Rubik's cube game - great gift, Dave and Bev...much better than the paint ball gun for Henry, DAVE!!! :) 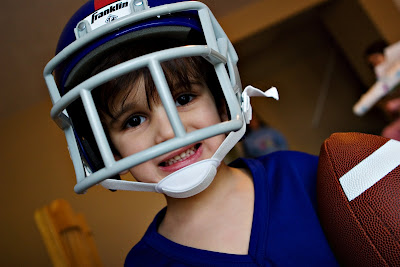 This may surprise you, but Minot really doesn't get that much snow; it's just that once we do get snow here, it doesn't go away since it's so cold. Anyway, we were all REALLY hoping for a white Christmas and thought we weren't going to get one until around 7pm we were blessed with a fresh blanket of snow - I think that counts as a white Christmas...at least we're going to count it!
Posted by M. at 9:02 AM

Henry doesn`t really look reassured!!! :-)))) So happy to see you had a good Christmas and your kids are doing great. I can only repeat.....it is such a pleasure to read your blogs and watch "your gang" grow