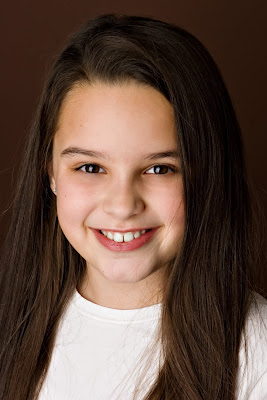 I was just telling my Mom the other day that Addy is the daughter she always wanted. You’d have to know my Mom to know what I’m talking about, but the point is; we are very different.

Addy will be 10 in March and thinks any enhancements you may try to make to your appearance is lying, i.e. makeup. She says she’s never going to wear any, especially because, “Why would you want to put it on every day, just to wash it off at night?” Yeah, why?

Addy LOVES geography, the presidents, cooking and lots of other nerdy stuff. She also gets very frustrated when she is supposed to learn something and it’s actually a challenge. She wants to just know. Well…don’t we all?

Addy is one of those kids that wants to learn by being told, not by watching. She asks me questions ALL THE TIME and if I say she asks too many questions, would I be a bad mom? She thinks commercialism is one of the worst sins. For instance: we were standing at a cash register, paying for our goods and she says, “what’s this?”... (me) “a gift card holder” ....(A) “WHY would you want to buy something to put a gift card in?!?!” “Addy…BE QUIET!”...(me, obviously)

Also, one day in the shoe department she says, “You’re not looking for more shoes for yourself, are you? You have WAY too many already.” I had a super response for that, ala my Grandma Barb, “I’m ALWAYS looking for new shoes, Addy.”

She is the child who told me that I should put half of the wrapped gifts away until next Christmas and really meant it. The other kids were very disturbed at the mere suggestion and so I suggested to Addy that maybe we could just put half of her gifts away until her birthday and she said, “Okay!”

Addy is the world’s best police officer and, sometimes, prison warden. That aside, she’s an extremely sweet girl. We are so blessed to have her as our first; she’s like my left arm and, most of the time, my mouth.
Posted by M. at 4:22 PM