We’ve had some nice days here this week, which has been so wonderful. Addy had a great time hanging laundry in the back yard one day. Of course, it wasn’t warm enough to actually dry, but at least we saw the sun! 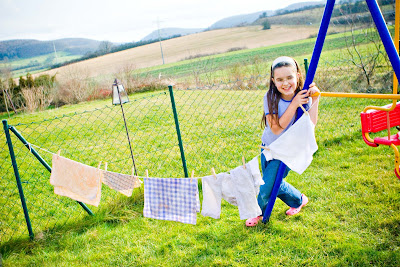 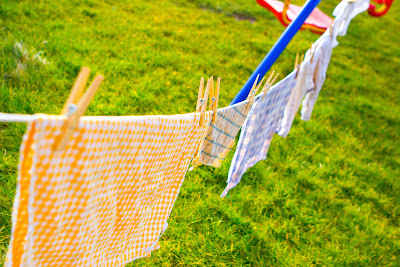 So, I thought I’d write a little about each kiddo for those of you who don’t really know them or just want to know more. Addy is such a serious girl who sees in black and white only, no grey.

This is a typical conversation with Addy:

Me: “Neither; they’re both unhealthy.”

Addy: “Well, which is MORE unhealthy?”

Me: “Addy, they are both unhealthy.”

Addy: “Well, if you chose one, which would it be?”

Do you think God thought I needed to learn patience, that’s why he chose me to be her mother?

(Me, putting on mascara)

Me: “Because it makes my eyelashes look longer, thicker and darker.”

(Addy sees an billboard on the side of the road)

Me: “It’s an advertisement; they’re trying to get us to buy their product.”

Addy: “That’s evil; they shouldn’t try to get us to spend our money.”

Anyway, she’s a great kid. She just thinks too deeply sometimes for my patience. So, I guess the problem is with me.
Posted by M. at 12:21 PM

That is so cute! Maybe you should lay off the lectures for a while!!! Just kidding.