We made it to Virginia. The flight was hard (because it's so long and the flight was very full), but uneventful. Kuddos to British Airways. It turns out that I had bronchitis before I left, so I spent the first day in Virginia in Urgent Care, but I didn't really have confidence that the doctor there knew how to deal properly with my immune suppression drugs. She sent me away with some antibiotics and after two days I still had a fev 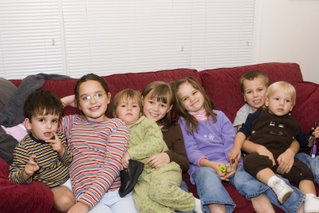 er, which is remarkable, medically, for someone on immune suppression. I decided I felt most comfortable going to a hospital, so I went to the ER. There, I felt very comfortable that the doctor had knowledge and experience to deal with me and it turns out the antibiotics prescribed would have been fine for a “normal” person, but not for someone like me because I might have all kinds of strange bacteria in my body. So, he gave me stronger antibiotics and told me I was wheezing, which is why my cough was uncontrollable. After starting me on an inhaler and the new antibiotics, things got better quickly.

After the bronchitis was gone, I just couldn’t get caught up on my sleep and my Myasthenia Gravis symptoms became worse, mostly double vision. I also experienced numbness in my toes, which really is unrelated, so I need to talk to my neurologist about that on the 12th.

Other than that, though, we had a great time in Virginia! J We had some fun times with family and lots of laughs and the historical sites we visited were rea 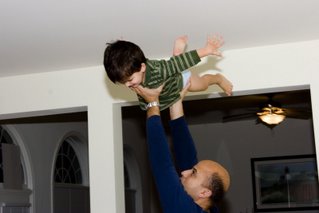 I’ll attach pictures and stories from each location. The first picture here is with the Pedersen kids and our kids. The Pedersens are friends from Germany that moved back to Northern Virginia in 2004. We’ve stayed in touch and I attached the picture here because some of you may know them and may be interested in the amazing growth in their kids (and family size!). It was fun to catch up with them.

The second picture is one of Henry's pasttimes, flying through the air, Buzz Lightyear style. As he's flying he says, "to infinity and beyond!" He was quite the king with the relatives. We had to knock him down a few pegs once he got home!